Woodring College of Education began life more than 100 years ago as New Whatcom State Normal School. Thus teacher training was and remains the heart of the institution that is now Western Washington University.

Signed into law in 1893 by Governor John H. McGraw, New Whatcom State Normal School was the third publicly supported teacher training school in the young state of Washington, following Cheney and Ellensburg. It was the second normal school in Whatcom County. The first was Northwest Normal School, a privately financed institution built in Lynden on land donated by pioneer Holden Judson. The Lynden school petitioned the state for support but was turned down and closed its doors in 1892 after seven years of operations.

Old Main was the first building on the New Whatcom campus. It was modeled after the Boston Public Library and built in 1896 using sandstone quarried on the Sehome Hill site. Due to labor issues and lack of operating funds, the school did not open its doors until September 6, 1899. Three wings were added by 1912 to accommodate the growing student body.

Eighty eight students enrolled the first day of classes, September 6, 1899. By the end of the week, the number grew to 160 and four weeks later to 220. Although this was a hoped-for, but unexpected outcome, it strained the meager resources of the fledgling operation and "pioneer spirit" was needed by students and staff alike to get through that first year.

Dr. Edward T. Mathes was hired as the first principal in May. Previously a faculty member at the State Normal School in Lewiston, Idaho, he in turn hired a minimal first staff of five more faculty and a custodian. In three short months this small crew was ready to open the doors to the first students. They were:

It was obvious by the end of the first month, that more faculty were needed and an additional three were hired - Miss Catherine Montgomery, Training Department; Miss Ida Baker, grammar and music; and Mr. Robert B. Vaile, physics and algebra. A student, Miss Hattie B. Thompson, became the first librarian.

The "zeal for learning and teaching" was apparently not dampened by lack of adequate state support. Indeed the new spirit on the hill inspired the support of citizens in Fairhaven and New Whatcom to donate enough money to furnish three more rooms in the building and the following year purchase and donate a private museum collection of 6500 rare specimens of minerals, stuffed birds and animals, and curios from around the world.

Even with the support of good neighbors, it was no small feat to overcome the difficulties of the fledgling institution. Rooms were insufficiently heated with overhead pipes and were poorly lighted. Students had to make due with donated textbooks and few library resources. Living accommodations were inadequate and hard to find. Most students lived with families in the neighborhood, who were often coaxed into providing lodging by the principal's wife.

The students themselves were often challenged by their own lack of previous education and language proficiency. Since secondary education in the state was so new, there were many applicants who had not gone beyond elementary school. By law, girls had to be 15 and boys, 16 to apply, and many were accepted on the basis of eighth grade graduation.

Very few enrolled students were born in the area that became Washington State in 1889. Many were children of immigrants and were so unfamiliar with the English language that interpreters were provided on opening day. These students were required to study English intensively. Those who made the most progress were rewarded after they delivered famous speeches of Presidents Lincoln and Washington on their respective February birthdays. It was not unusual during the course of the academic year to hear a complete Shakespearean play delivered with a Scandinavian accent.

There were also more experienced students - teachers and graduates of liberal arts colleges, universities and other normal schools. This mix of students enhanced both the educational and recreational opportunities of all students. By the end of the first month, five literary societies had been organized, along with a thespian club that traveled and performed around the county. There were also numerous organized outings for all students in the mountains and surrounding islands. 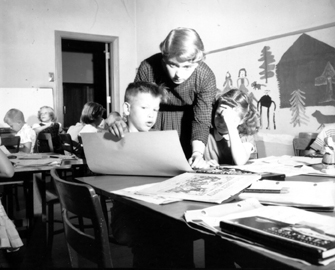 Campus School shortly after it opened in its new home in 1942. The training school operated from 1899 until 1967. This Campus School building became part of Miller Hall and the current home of Woodring College of Education (renamed from the School of Education in 1989). 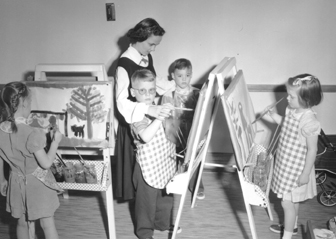 Sharon Wallace, student teaching in a kindergarten class at Campus School, May 18, 1947. (Right)

An all-class Campus School Reunion was organized by Woodring College of Education in 2007 that brought almost 500 Campus School alumni to the Western Washington University Campus.

The purpose of the Bond-Skeen Typing Program was not “to make touch typists of elementary children.” It was an apparently successful method of teaching communication skills – listening, speaking, reading and writing, that resulted from 20 years of Leona Bond’s experimental work with reading readiness. She discovered early in her teaching career that the typewriter was a powerful tool that facilitated learning with careful guidance from the teacher. Because there were few “guides” for teachers at the time, Bond developed her own - the basis of the “Teacher’s Manual for the Bond-Skeen Typing Program,” copyrighted in 1960 and updated in 1974. The 42-page manual had two goals: to provide teachers with enough detailed guides and short cuts to allow for a “limitless range for creative teaching” and to “present the usage of the typewriter as a developmental program, geared to what is known about the sequential development of children.”

It was a two-year program which began in kindergarten and carried through grade one. Included were instructions and benefits for using the program with beginning and higher levels, and with special education students, as well as expected outcomes and assessment tools for each. 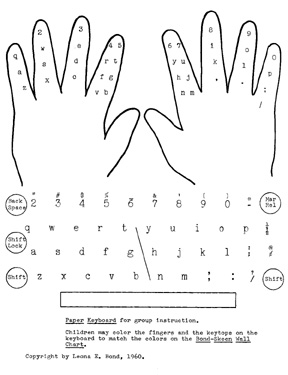 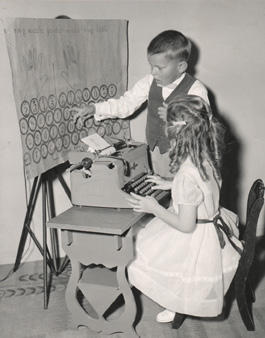 From School of Education to Woodring College 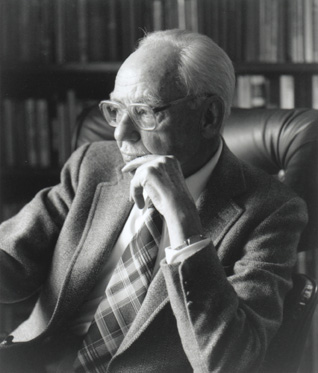 Dr. Paul Woodring joined the faculty at the Western Washington College of Education in 1939. With a fresh PhD in psychology from Ohio State, he set out to pursue his goal - to teach undergraduates in a small college in the "Far West." He found that sought-for home in Bellingham for the next half century.

Dr. Woodring, age 87, died at his Bellingham home, Nov. 12, 1994. By then his reputation had grown to an international level reflected in a memorial tribute in the New York Times.