What is the One Night Count?

King County has the nation's best-establish point-in-time count of homelessness. Every January since 1980, 1,100 volunteers with 125+ trained team leaders have combed the streets of Seattle counting men, women, and children who are outside during one winter night making it the single largest community count organized in the United States. In order to effectively understand homelessness, both at-risk and transitional housing populations, the One Night Count consists of two integral parts: a survey of emergency housing options (transitional and shelters) and a street count conducted by volunteers who scour the street in order to count every person without shelter and staying outside, including parks, vehicles, and makeshift shelters. While a one night count is a leading point-in-time indicator of the homeless population, it is always assumed to be an undercount as many people as many take careful precaution to be unseen.

While the One Night Counts is important measure of the current homeless population, the importance extends much further. It acts as an indicator of social and economic conditions that are constantly changing. The results of the One Night Count drives advocacy and awareness; both from volunteers and non-profits, but also the community in the pursuit of the overall goal; to end homelessness. 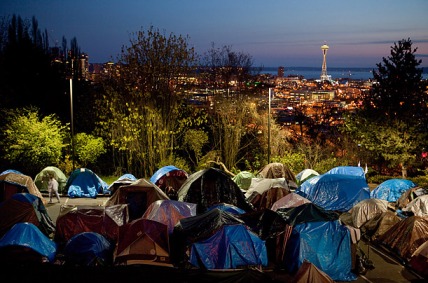 Homelessness is on the rise in King County with at least 3,772 men, women, and children without shelter during the 2015 One Night Count. This is an increase of 21% over the past years figures, demonstrating a growing need for basic safety and shelter. Every night people seek shelter in doorways, under bridges, on sidewalks, and in their cars and public buses. During the 35th annual One Night Count, volunteers tirelessly worked through the night in order to assess a point-in-time count of the homeless population.

"We do the One Night Count to document how many people lack basic shelter in our community" said Allison Eisinger, Executive Director of the Seattle/King County Coalition on Homelessness. "We already know that homelessness is a crisis. We know that there are good and effective programs that have helped and housed many, yet we have not met capacity with the need. This years count shows that our region's unmet need for housing and shelter is greater than ever."

The One Night Count does not include thousands of people who are in transitional housing and shelters; those statistics are collected separately.

Ready to take action? Visit www.homelessinfo.org to be part of the solution. Remember that everyone counts.

"The 2014 One Night Count of homeless people in King County took place early this morning. I am profoundly grateful to the many volunteers and supporters whose careful work made the Count safe, respectful, and accurate. View One Night Count Results.

Our teams counted 3,117 men, women, and children who were outside in the small hours of the morning. This is 381 more people than our volunteers counted outside one year ago ~ a 14%  increase that painfully underscores the urgent unmet need in our own backyards.  People were sleeping in doorways, on sidewalks, under bridges, in their cars, on public buses, and in temporary structures and makeshift campsites. Our serious work starts now.

The work we do together on this one night is just the beginning. This morning, returning to warmth indoors, volunteers told us of a teenager sleeping in a doorway with a suitcase, a family-size tent with a stroller parked outside, and a man who proudly showed counters the garden he created around his campsite.  We are especially aware of this truth: everyone should have a place to call home." Alison Eisinger -Seattle/King County Coalition on Homelessness

The 2013 One Night Count was conducted between 2:00 and 5:00 am throughout the Seattle area. During those three hours, 800 volunteers scoured streets finding people surviving by riding late night buses, curling up under bridges in a blanket, and in doorways. 2,736 men, women, and children were counted; an increase of more than 5% from the pervious year.